At about 1350 on 14 August 2018, a second engineer working onboard the trawler, Sunbeam, was found collapsed inside a refrigerated salt water tank. Although rescued from the tank, he could not be resuscitated.

Sunbeam was in Fraserburgh and the evidence available strongly indicated that the second engineer had entered the tank to sweep away residual water.

When he was found, three of his crewmates went into the tank to help him; they all suffered breathing difficulties and one also collapsed.

Two other crew members then donned breathing apparatus and rescued their struggling crewmates; the second engineer could not be resuscitated.

This fatal accident happened because the second engineer entered the tank, which was an enclosed space, without any of the safety precautions normally associated with such an activity; there was no ventilation, the atmosphere was not monitored and he was working alone without communications.

Entry into Sunbeam’s refrigerated salt water tanks without appropriate safety precautions had been normalized by the crew; however, on this occasion, the atmosphere could not support life because Freon gas had leaked into the tank through corroded tubes in the evaporator of the vessel’s starboard refrigeration plant.

Although the Freon gas leak was less foreseeable than other potential hazards in refrigerated salt water tanks, this accident highlights the critical importance of safety precautions and procedures for any enclosed space.

Sunbeam had been subject to regular surveys by both the Flag State and its recognised organisation; however, a lack of clarity regarding responsibility for assessing refrigeration equipment resulted in an inconsistent level of oversight of this machinery.

Additionally, fishing vessels were excluded from UK regulations for personnel entry into dangerous spaces, and guidance on enclosed space working was not included in the MCA’s Code of Practice for Fishing Vessels of 24 metres in length and over.

See also: Enclosed space deaths onboard: Why do they persist?

-The owners of Sunbeam have:

–>The Maritime and Coastguard Agency is recommended to:

-Review Letters of Delegation to its Recognised Organisations in order to ensure clarity of understanding with regard to responsibility for survey of machinery items.

–>The owners of Sunbeam are recommended to:

-Implement an onboard safety management system in accordance with the MCA’s Fishing Safety Management Code, specifcally ensuring that safe systems of work are in place for all operations.

–>The Scottish Pelagic Fishermen’s Association is recommended to:

-Encourage its members to maintain onboard safety management systems in accordance with the MCA’s Fishing Safety Management Code. 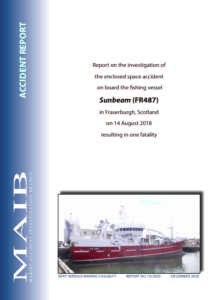